I’m so glad that I’m re-reading War and Peace. Yes, it’s really (really) long at 1358 pages, but it’s also so moving. I’ll write a little summary of my thoughts on Volume I here, so if you’re reading it and haven’t got that far yet, or are planning to read it, I apologise for any spoilers. 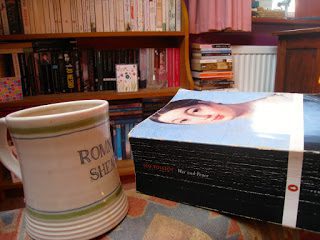 The book begins with a party – well, a soirée to be more elegant- of Anna Pavlovna’s, in which we are introduced to Pierre. He must be my favourite character, right from the beginning (despite the policeman and bear fiasco). He tries so hard to be valued in the hierarchical society, and yet just appears naive most the time. However, he really develops as a character in the opening volume, and I particularly enjoy the passages surrounding his introduction to freemasonry. For instance, the mason says to him:

“‘Look with a spiritual eye into thine inner being, and ask thyself whether thou art content with thyself. What hast thou achieved relying on intellect alone? What art thou? My dear sir, you are a young man, you are wealthy and well educated. What have you done with the blessings vouchsafed you? Are you satisfied with yourself and your life?’

‘No, I loathe my life,’ said Pierre with a frown.”

I admit to underlining this section, and many other bits around it. Pierre is the perfect character to introduce Tolstoy’s philosophising of the big questions in life; he seems so purely good and innocent, despite his early debauchery, gambling and gluttony (how is that possible?). More of Tolstoy’s genius is incorporated into the book when Pierre talks with Prince Andrey shortly after his religious realisation. Tolstoy counters Pierre’s new ideas about religion by using Andrey to introduce common doubts and dismissals, as in this passage:

“What’s right and what’s wrong is is something we can’t decide. People keep making mistakes and they always will, especially when it comes to right and wrong.”

Andrey seems to be the owner of most of the book’s finest phrases, including his declaration that, “Yes! It’s all vanity, it’s all an illusion, everything except that infinite sky.” Now that’s some food for thought, alongside a reason to look out of the window.

But anyway, it’s as if Tolstoy wrote Pierre and Andrey’s dialogues to make up his own mind on religion, albeit in an incredibly beautiful way. Pierre constantly seeks to better himself and even keeps a journal on self-improvement, just like Tolstoy did himself. Tolstoy was also consumed by thoughts of death throughout his life, and his nihilism bridging from reading Schopenhauer early in life may have influenced the inclusion of Count Bezukhov’s death shortly into the novel.

On other characters, I can’t help feeling sorry for Princess Marya Bolkonsky; she’s constantly reminded of her ugliness and is subject to her father’s rather ridiculous timetables (although I can’t help but admire him from an ocd-inspired standpoint). Another thing is that everyone seems to hate Boris, although as of yet I’m not entirely convinced that he deserves it. I’ll make up my own mind more thoroughly as the story develops. Hélène I cannot bear – she seems dragged straight from the most superficial and conceited realm of modern celebrity life and placed back two hundred years ago in Russia. It’s a great example of how relevant War and Peace still is, alongside its avid gamblers, drinking games, and rich fathers bailing out their children.

I’m rather hesitant about calling War and Peace merely “a story”, although Tolstoy himself dismissed it as a novel, poem and historical chronicle. Perhaps “War and Peace” is all it should ever be – those words have come to immediately connote fame, beauty, and perhaps most of all, length over the years. I’ll let you know how I get on with Volume II!

"Head and shoulders above the others": What James Joyce Thought of Leo Tolstoy
The power of a sunset: how Viktor Frankl & Tolstoy’s Pierre Bezukhov are lifted from hardship by the...
Reading W.B. Yeats's "An Irish Airman Foresees His Death" as a Meditation on Life
What's the best translation of War and Peace by Leo Tolstoy?
Celebrating Tolstoy's 186th Birthday with a Giveaway of A Calendar of Wisdom
Ernest Hemingway's list of 16 books we ought to read, including War and Peace and Anna Karenina
Initial Thoughts on Rosamund Bartlett's Translation of Anna Karenina
Lessons on failure from Pierre in Tolstoy's War and Peace
Reasons to Read Anna Karenina, Part 1: The Authenticity of Levin
What Leo Tolstoy Can Teach Us About Overcoming Anxiety