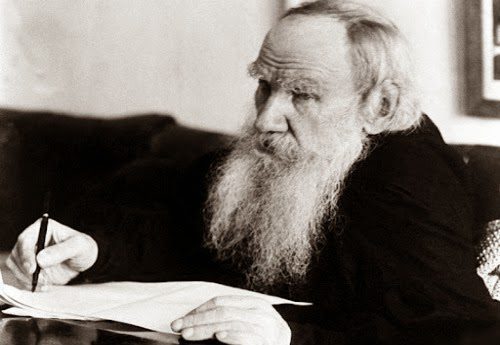 In 1891, a Petersburg publisher (who was undergoing the impressive feat of asking 2,000 influential luminaries for their favourite books) contacted Leo Tolstoy to ask about the books that had influenced him.

Somewhat characteristically considering his love for lists, Tolstoy grouped his recommendations into the five stages of his life that he had covered so far, up to the age of 63. For each stage, books were also categorised as “great”, “v. great”, and “enormous”.

The result is the following, as included in R.F. Christian’s wonderful collection of Tolstoy’s Letters: Volume II (he has also published Tolstoy’s diaries in two volumes).

The letter opens with a disclaimer – “I am sending the list I began, but didn’t finish, for your consideration, but not for publication, since it is still far from complete” – and the heading, “WORKS WHICH MADE AN IMPRESSION”.

Leo Tolstoy’s favourite books from each stage of his life

Childhood to the age of 14 or so

“Great”:
Tales from The Thousand and One Nights: the 40 Thieves, Prince Qam-al-Zaman
Pushkin’s poems: Napoleon

“Great”:
Tales of Good and Evil by Nikolai Gogol: Overcoat, The Two Ivans, Nevsky Prospect
The Conquest of Mexico by William Prescott

Poems by F.T. Tyutchev
Poems by Koltsov
The Odyssey and The Iliad by Homer (read in Russian)
Poems Afanasy Fet
Phaedo and Symposium by Plato (read by Tolstoy in Cousin’s translation)

“V. great”:
The Odyssey and The Iliad (in Greek)
The byliny
Xenophon’s Anabasis

“V. great”:Book of Genesis (in Hebrew)
Progress and Poverty by Henry George
Confucius and Mencius

If you enjoyed this preview of Tolstoy’s skill for lists, you might also appreciate his Calendar of Wisdom, the collection of quotations that he believed to be his most important contribution to humanity. There are also his amusing “Rules of life as part of his self-improvement project, including “Visit a brothel only twice a month”.