I read The Gutsy Girl: Escapades for Your Life of Epic Adventure

by Caroline Paul when I was travelling in Greenland in June 2016. I had first heard about Caroline Paul a few months before, in her Tim Ferriss podcast, and fell in love with her incredible bio (including credentials such as lunger, firefighter, paraglider, author, and pilot). For a book about being a gutsy girl, there couldn’t be a better author.

Yes, the book is aimed at younger girls, but that shouldn’t stop you from reading it. There was so much in the book that I would’ve loved to hear when I was that “shy and fearful kid”, but it’s just as welcome now in my twenties. And I think it would be for my forties, fifties, and onwards.

I don’t know about you, but I know my life is simply better when I can sea kayak, climb trees, and enjoy a sandwich on a mountaintop. Adventure balances out my occasional seriousness and inability to understand jokes. I’m no Bear Grylls, but I give myself permission to call myself an adventurer. It’s a title that you give yourself before others do. And when that’s how you define yourself, it’s pretty hard to live a boring life.

It’s so easy to hang on to our fears when all we need is a gentle nudge to remind us that our life should be a grand adventure. That’s just one reason to have books like The Gutsy Girl around us. Another reason? The beautiful illustrations.

Here’s an excellent summary of the book from Caroline’s website:

It’s Lean In for middle grade girls, set not in the workplace but on bicycles, tree branches, sea kayaks, and cliff edges.

If you’re a female adventurer on any level, you should read it. And buy it for all the young gutsy girls you know.

Notes and takeaways from the book 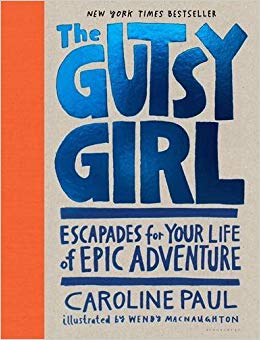 “I had been a shy and fearful kid. Many things had scared me. Bigger kids. Second grade. The elderly woman across the street. Being called on in class. The book Where the Wild Things Are.”

“What had happened to the shy and fearful kid? She was still there. But somewhere along the way I had decided that she wasn’t having a lot of fun. I wanted a life of Grand Adventure, the kind I had read about in books. So I started to kindly tell the shy and fearful girl to step back, and make way for the adventurous girl that was also there. The girl who really wanted to captain a milk carton pirate ship.”

“Adventure is worthwhile in itself.” —Amelia Earhart, pilot

“Never be limited by other people’s imaginations.” —Mae Jemison, astronaut

‘You’re there, but I’m not concentrating on you!’ I told Fear”.

“What’s wrong with this picture?” —Barbara Hillary, seventy-five-year-old retired nurse, upon hearing that no African American woman had been to the North Pole. She hired a personal trainer to get in shape, learned to ski, and went.”

“Never give up, because that is just the place and time that the tide will change.” —Harriet Beecher Stowe, author, human rights activist

“ In 1895, Fanny Workman biked 2,800 miles with her husband across Spain—in a skirt. She also biked across North Africa and through India. But in 1898 she fell in love with mountaineering. Still wearing skirts and fashionable hats, she climbed peaks all around the Himalayas.”

“If you’re never scared, or embarrassed, or hurt, it means you aren’t taking any chances.” —Julia Sorel, artist

“Rita Pierson is an educator who tells students who want more confidence to say to themselves, “I am Some-body . . . I am powerful and I am strong . . . I have things to do and people to impress and places to go!” She says of this mantra, ‘If you say it long enough, it starts to be part of you.’”

What’s the sentence you’re going to tell yourself day in and day out?

“There’s a difference between being careful and living in fear. The former will keep you alive, the latter will make you a bystander in people’s lives.” —Anna Fitzpatrick, writer

“One day Roz Savage wrote herself two obituaries: the first for the person she actually was and the second for the person she wanted to be. Realizing the two obituaries differed mightily, she gave up her job as a management consultant, sold her house, and embarked on a life of adventure. She is best known for being the first woman to row alone across the Atlantic, Pacific, and Indian oceans.”

“Get out a globe. Find Croatia. See where it is in relation to the rest of the world. Spin the globe a few times, and find another country you’re curious about. Look up its history. Look up its sights. Now write down your ideal adventure itinerary! What town/mountain/river would you first visit, and what would you do there? Where would you go next?”

“You gain strength, courage, and confidence by every experience in which you really stop to look fear in the face.” —First Lady Eleanor Roosevelt

The Salt Path by Raynor Winn: finding strength and facing illness with a 630-mile hike
9 books like Where the Crawdads Sing about retreating into nature
The Priory of the Orange Tree: an entrancing story of dragon riders, courage & adventure
Marina Keegan on Finding Hope & the Courage to be Creative
Kierkegaard on how "if one just keeps on walking, everything will be all right"
8 books about courage to help us craft and change our worlds
Have courage like Arya and sail beyond the sunset (what is west of Westeros?)
Educated by Tara Westover and how learning can change the course of a life
Haruki Murakami on travelling light (and just getting up and going)
Exploring the world with Tennyson to overcome anxiety: "for my purpose holds to sail beyond the suns...