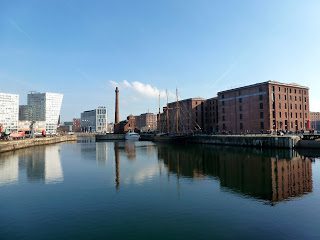 I spent last weekend with my boyfriend, in his hometown of Liverpool. I’ve posted many times about it, I’m sure, but it must be my favourite city. Just before I left I had my literature seminar on The Autobiography of Alice B. Toklas by Gertrude Stein. I’ve never read anything by Stein before, and I’m not convinced that I’ll read another of her books anytime soon. However, I did enjoy parts of the book, and it was certainly interesting to study. I’m eager to hear your thoughts on the book too, if you’ve read it.
The premise of the book is Alice B. Toklas’s autobiography, although it’s not that simple (possible spoiler coming up).  It is revealed at the end of the book that the “autobiography” is written entirely by Stein, who attempts to convey Toklas’s perspective of their life together.
This is also mentioned on the blurb on my Penguin edition:

For Gertrude Stein and her companion Alice B. Toklas, life in Paris was based upon the rue de Fleurus and the Saturday evenings, and ‘it was like a kaleidoscope slowly turning’. Picasso was there with ‘his high whinnying spanish giggle’, as were Cezanne and Matisse, Hemingway and Fitzgerald. As Toklas put it – ‘The geniuses came and talked to Gertrude Stein and the wives sat with me’. A light-hearted entertainment, this is in fact Gertrude Stein’s own autobiography and a roll-call of all the extraordinary painters and writers she met between 1903 and 1932. Audacious, sardonic and characteristically self-confident, this is a definitive account by the American in Paris.

This characteristic “self-confidence” of Stein nearly drove me mad. Within the first few pages we hear about the “three geniuses” that Toklas had the pleasure to meet within her lifetime: Picasso, Alfred Whitehead and Gertrude Stein. Yes, Stein, writing from the perspective of her partner Alice Toklas, endlessly reminds the reader that she is in fact a genius. And more. I’m sure that she was a very influential woman, but this self-aggrandising narrative style isn’t for everyone. The narrator refers to Gertrude Stein, never simply Gertrude, on most pages throughout the book, and Alice B. Toklas seemed to me always confined to a backseat position. I would love to have read a real autobiography by Alice B. Toklas. I’m sure it would be considerably more honest and genuine, and I’d be interested to see how Alice really felt about Stein.

However, perhaps it would not be as interesting as Stein’s “autobiography”. What really drives this book is the mention of the artists and intellectuals that Stein and Toklas socialise with, most noticeably Picasso, Matisse, Fitzgerald and Hemingway. Naively, I’ve never thought of these artists and authors as actual people who socialised and had drinks with friends. Therefore, I found Stein’s portrayal of these artists in social situations inherently interesting! As a great admirer of F. Scott Fitzgerald, here’s one of my favourite quotes:

Gertrude Stein had been very much impressed by This Side of Paradise. She read it when it came out and before she knew any of the young American writers. She said of it that it was a book that really created for the public the new generation. She has never really changed her opinion about this. She thinks this equally true of The Great Gatsby. She thinks Fitzgerald will be read when many of his well known contemporaries are forgotten. Fitzgerald aways says that he thinks Gertrude Stein says these things just to annoy him by making him think that she means them, and he adds in his favourite way, and her doing it is the cruellest thing I ever heard.

Readers must question whether this is a feminist, or alternatively radical, text. My opinion would probably be that it is not, although I’m extremely biased by reading it in our contemporary society. Also, Stein’s narration contains very blasé attitudes of “radical” topics and activities, which makes them easily overlooked. Stein spends most of her time around men, she learns to drive and later makes trips in her car to pick up wounded French soldiers, she is a lesbian, and she frequently travels with other females across the Atlantic and through Europe. Nowadays this would be entirely normal, but in the 1920s? Perhaps not. I may not appreciate the character of Gertrude Stein, but I love how forward-thinking, and moreover nonchalant about it all, she was.

As a result, I would recommend this book to others, but I will emphasise that the narrative style may well lead to angry outbursts and irritation. I speak from experience.

On an unrelated note, I lately bought this set of postcards from Waterstones. I have a bit of an obsession with postcards – my bedroom noticeboards are covered in them. These new ones are literary ones, and I think they’re great. I particularly like the red Great Gatsby one.

My favourite books of 2017: A Whole Life by Robert Seethaler, plus 6 others
The 10 best books I read in 2019
Reading tip: how to get your Kindle highlights and notes on your computer (and sync to Evernote)
10 books to give as gifts this Christmas (or to treat yourself)
Study Success: 11 Books & Articles to Help Students Hack Their Education
The simple & timeless wisdom of The Things You Can See Only When You Slow Down by Haemin Sunim
"All things are at odds when God lets a thinker loose on this planet": Edith Hamilton and sexism in ...
Starting 2015 with a Recap of 2014 on Tolstoy Therapy: 10 Favourite Articles & 10 Best Books
5 Pieces of Advice for Reading, Understanding & Enjoying James Joyce
A new direction for Tolstoy Therapy