On the point of returning to the United States from England, where he had lived from 1912-1915, Robert Frost wrote in a letter to a friend: “England has become half my native land – England the victorious” (“Selected Letters”). This is one of the more outward signs that Frost was facing a sense of physical “in-betweenness” or homesickness at this time, but we can also sense similar feelings – although in a more subtle, interior way – in Frost’s poetry, largely through his illustration of uncertain location, landscape and feeling.
Could reading Frost’s poetry reassure and help us with our own feelings of homesickness and displacement when we’re in similar situations? 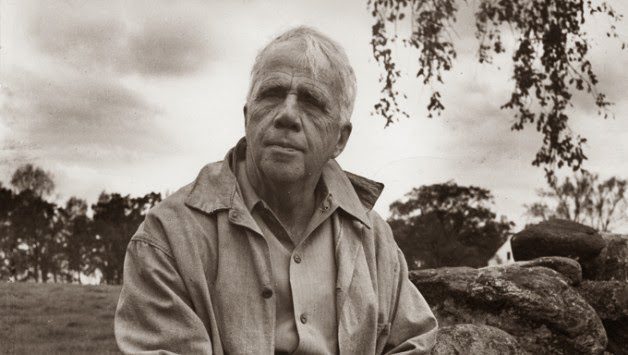 Frost arrived on English soil in September 1912, hoping for a last chance at gaining the literary recognition he had not found in America. Frost was successful: it was in England where he achieved publishing success with the London firm of David Nutt, connected with his first real audience, and enjoyed the supportive atmosphere of English literary society. Frost felt a connection to both America and England, and, as his later poem “A Record Stride” shows, was figuratively caught mid-Atlantic as a result:

I touch my tongue to the shoes now
And unless my sense is at fault,
On one I can taste Atlantic,
On the other Pacific, salt.
One foot in each great ocean
Is a record stride or stretch (21-26).

Although Frost gained ground as a poet during his stay in England, we can say that it led to a displacement of culture, identity and place. Upon returning to America, Frost even wrote, “The first sight of America was very very bad and disposed us to sing Why did I cross the deep?” (“Family Letters”)

However, a sense of displacement may have influenced Frost’s decision to move to England. Five months before he set sail, Frost wrote “The Wood-Pile”. In this poem, Frost describes a disorientated speaker walking alone through a wood in winter, or through what Robert Pack describes as a “landscape of lostness”:

The view was all in lines
Straight up and down of tall slim trees
Too much alike to mark or name a place by
So as to say for certain I was here
Or somewhere else: I was just far from home (5-9).

Here there is no reassuring sense of place, only the supposedly comforting thought of being “just far from home”. The evocation of “home” implies a place to return to and feel comfortable, yet the speaker is devoid of any certainty and orientation, caught in a landscape of “trees/ too much alike to mark or name a place by”. Will the desire to return home become too strong for the speaker?

For Frost, being lost can be crucial in developing the speaker’s ability to discover new thoughts or to ruminate effectively. In “The Wood-Pile”, the speaker interprets with detail the pile of wood in front of him, “piled – and measured, four by four by eight” (24). The abandoned woodpile is in a state of in-betweenness, caught halfway between one state of existence and another. It belongs where it is found because it was made there and never moved, but it does not belong because it has not fulfilled its human purpose. Instead, with a “slow smokeless burning of decay”, it disintegrates slowly, like the “warping” bark of the trees around it (29).

Profoundly divided feelings are introduced at line two of “The Wood-Pile”: “I paused and said, ‘I will turn back from here./ No, I will go on farther” (2-3). Here the speaker confronts the tempting desire to return to his home that is only “just far” away, but resolves to go on into the unknown. However, the quick alternation between decisions undermines the reader’s belief that the speaker will keep to his intentions. I know that I’ve faced similar feelings before, wanting to turn back home when really I should be going forward into the new and unfamiliar.

This tone of uncertain deliberation in “The Wood-Pile” matches the unsuccessful attempts at decision making in “The Sound of the Trees”, particularly between lines 10-11: “They are that that talks of going/But never gets away”. In the last few lines of “The Sound of the Trees”, the speaker makes a resolution to leave, yet it is a decision couched in the vaguest of terms:

I shall set forth for somewhere,/ I shall make the reckless choice/ Some day (19-20).

The speaker appears fixed to a place that he wishes to leave, although he contemplates the possibility of eventually being content where he is as he grows “wiser and older” (13). Uncertainty and the fear of making a “reckless choice” compels the speaker’s feet to “tug at the floor” (15), and the reader cannot help but doubt that he will ever feel truly at home here. Haven’t we all experienced this at some point or another?

Robert Frost’s poetry demonstrates a spatial displacement that can be linked to his own transatlantic journey between 1912-1915. As a result of his stay in England, Frost arguably developed a multi-faceted – or in-between – way of viewing and describing his surroundings, resulting in the prominence of uncertainty in his poetry. Not only do I find this interesting to explore in a literary way, it’s proved so useful to apply to my own life and journeys. While living in Barcelona, Frost’s poetry was a great provider of comfort and reassurance for my own feelings of homesickness.

So, if you’re facing feelings of homesickness, or not feeling at home where you arguably should, why not try settling down with a Robert Frost anthology?

Creating the most fulfilled version of ourselves with City of Girls by Elizabeth Gilbert
Allen Ginsberg on never working again (and living a "literary and quiet city-hermit existence" inste...
8 books for women with autism to read (+ my story)
Navigating a Confusing World with Whitman's "Of the Terrible Doubt of Appearances"
On going about your own life when a loved one is suffering: W. H. Auden’s “Musée des Beaux Arts”
'Feast on your life': Tom Hiddleston on Derek Walcott's "Love After Love" for accepting ourselves
Reading W.B. Yeats's "An Irish Airman Foresees His Death" as a Meditation on Life
Exploring the world with Tennyson to overcome anxiety: "for my purpose holds to sail beyond the suns...
Books to read when you're feeling lost and directionless in life
Nick Cave's chosen "sad poem of loss": "The Widower in the Country" by Les Murray