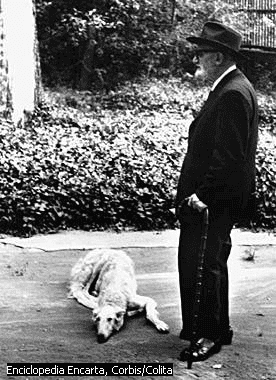 For college, not too long ago, I translated Ganarás La Luz, a poetry collection by a man called León Felipe. He’s completely underrated, and one of the finest civil war poets in my opinion.

Felipe was born in 1884 to wealthy parents, and later went on to start a business as a pharmacist. However, due to his literary talent, he elapsed with an itinerant theatre troupe.

Felipe was charged with fraud for becoming bankrupt after neglecting his business, and spent two years in jail. Upon his release he began writing literary reviews, and eventually his own books began to be published.

Some scholars have included him in the Generation of 27, and various poems of his were found in Che Guevara’s “Cuaderno Verde”, found amongst his belongings when he was shot in 1967.

He fought in the Spanish Civil War for the Republicans, and in 1938 he left Spain and began a voluntary exile in Mexico, where he died.

In Ganarás La Luz, published in 1943, Felipe touches upon the political and military position of Spain. He does this beautifully, and often refers to other collections of poetry (Whitman’s Leaves of Grass) and ancient myth (story of Prometheus) amongst his metaphors.
I thought I’d include a poem from the collection, and perhaps post more in the future. It’s something different to read from the usual Lorca or Neruda, and it gives you something to think about.
I AM LEAVING BECAUSE THE EARTH IS NO LONGER MINE
Because my feet are tired,
My eyes are blind,
My mouth parched
And my body docile and light,
Ready to enter the air.
I am leaving because there are no paths left for me on earth.
I emerged from water, I have lived in blood
And now the Wind awaits to sweep me to the sun…
I emerged from the sea…and I will expire in the flames.
It’s not the most positive of poems, perhaps, but it provides me with some consolation when I’m facing a bit of an identity crisis. I certainly don’t want to “expire in flames”, but it shows how life is really just a cycle that we complicate with our minor anxieties and problems.
My boyfriend’s staying this weekend, and so if the weather’s good I’ll be having two days of walks and baking. Ah, the good life. I’ll leave being “swept to the sun” for a long time in the future if I can help it.


Retreat Into The Sanctuary & Enjoy Seven Days to Reset

Nick Cave's chosen "sad poem of loss": "The Widower in the Country" by Les Murray
Reading W.B. Yeats's "An Irish Airman Foresees His Death" as a Meditation on Life
Allen Ginsberg on never working again (and living a "literary and quiet city-hermit existence" inste...
Navigating a Confusing World with Whitman's "Of the Terrible Doubt of Appearances"
On going about your own life when a loved one is suffering: W. H. Auden’s “Musée des Beaux Arts”
On Visiting Dove Cottage, William Wordsworth's Home, to Better Enjoy His Poetry
Exploring the world with Tennyson to overcome anxiety: "for my purpose holds to sail beyond the suns...
Poetry for Letting Go: In Blackwater Woods by Mary Oliver
'Feast on your life': Tom Hiddleston on Derek Walcott's "Love After Love" for accepting ourselves