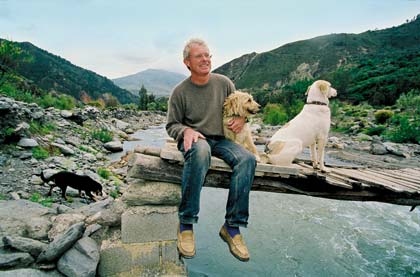 I’ve almost completely run out of reading material. Well, I have my Kindle, but I like to have actual books lying around. Luckily, I found A Parrot in the Pepper Tree lurking in my bookshelf, a book I’ve always dismissed before. I think it was from a pile of books I stole from my Mum’s (very limited) collection, and I’m guessing she bought it because it’s about a sheep shearer originally from Sussex – two traits that also apply to my Dad. However, this particular sheep shearer, Chris Stewart, relocates to a remote Spanish mountain farm in Las Alpujarras, south of Granada. The non-fiction tale follows the life of Chris, Ana and their daughter, Chloë, as they are unexpectedly joined by Porca, a mischievous parakeet.

It’s such a homely story, and I particularly loved the neighbours of the farm. There’s a real sense of community, and everyone has their own particular quirks. Everything about the life of Chris and his family is so alien to what most people are used to, as evident in the visit of journalists to their home. It’s a clash of two worlds: the English countryside and it’s (somewhat traditional) sheep shearing, and Spanish flamenco, language and lifestyle.

“Porca is particular about not only the guests in his bathroom but objects. He detests above all the presence of the blue plastic toothmug on top of the washing-machine cover, so sometimes, to keep my end up, I place it carefully on that very spot. It never fails to enrage him. Incensed, he hurls himself from his shower tap at the offending mug, trying to guide it towards the gaping lavatory to score the longed-for hit and watch the loathed object float on the waters within. He can be further tormented by filling the mug up with water so he can’t move it, or shutting the lid of the lavatory. Such are my small revenges on my rival.”

How Much Do You Really Remember About The Books You've Read?
My favourite books of 2017: A Whole Life by Robert Seethaler, plus 6 others
10 books to give as gifts this Christmas (or to treat yourself)
Whether or not to keep blogging: taking a sabbatical after one million pageviews
Study Success: 11 Books & Articles to Help Students Hack Their Education
A new direction for Tolstoy Therapy
Sit and be peaceful with Silence: In the Age of Noise by Erling Kagge
Books for leaving a job that makes you unhappy & going freelance (from my last six months)
5 Pieces of Advice for Reading, Understanding & Enjoying James Joyce
7 gentle pieces of wisdom from Thich Nhat Hanh on loving ourselves (How to Love Part 1)