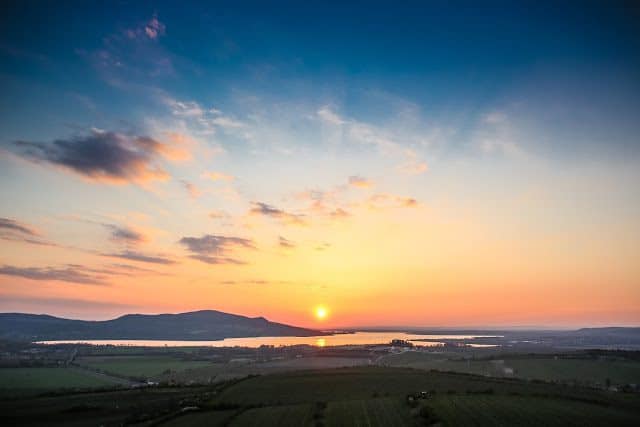 Despite experiencing unimaginable hardship during the Holocaust, Viktor Frankl describes in Man’s Search for Meaning how he was able to admire the beauty of a sunset like never before:

If someone had seen our faces on the journey from Auschwitz to a Bavarian camp as we beheld the mountains of Salzburg with their summits glowing in the sunset, through the little barred windows of the prison carriage, he would never have believed that those were the faces of men who had given up all hope of life and liberty.

This experience links to Viktor Frankl’s concept of logotherapy, a treatment literally meaning “therapy through meaning” that is based on the premise that we are motivated by an inner pull to find a meaning in life. Essentially, life has meaning under all circumstances, even the most miserable ones.

I find it interesting that in Tolstoy’s War and Peace, Pierre Bezukhov has a similar experience to Frankl when he is falsely imprisoned for arson. One morning, Pierre recognises the awe of,

a sudden glint of light in the east followed by the sun’s rim rising majestically from behind a cloud, and the domes and crosses, the hoar-frost, the horizon and the river all merrily sparkling in the new light

Despite his captivity, Pierre develops an awareness of his self and surroundings in contrast with his earlier absentmindedness and desire for distraction. As a result, he is able to recognise the beauty of nature around him. This leads to “a new surge of strength and vitality, the like of which he had never known before”, which only expands “as the hardships of his plight had gone on increasing”.

As Andrew Kaufman describes in Give War and Peace a Chance,

Suddenly there is no better place to be–no world to save, no utopia to create, no alcohol or beautiful woman or poker game in which to seek intoxication […]

Instead, circumstances force Pierre to “plant his feet firmly on the ground, and live, like [the peasant Platon Karataev], in the here and now”.

Look around. If you spot “a sudden glint of light”, try to savour it for a moment.