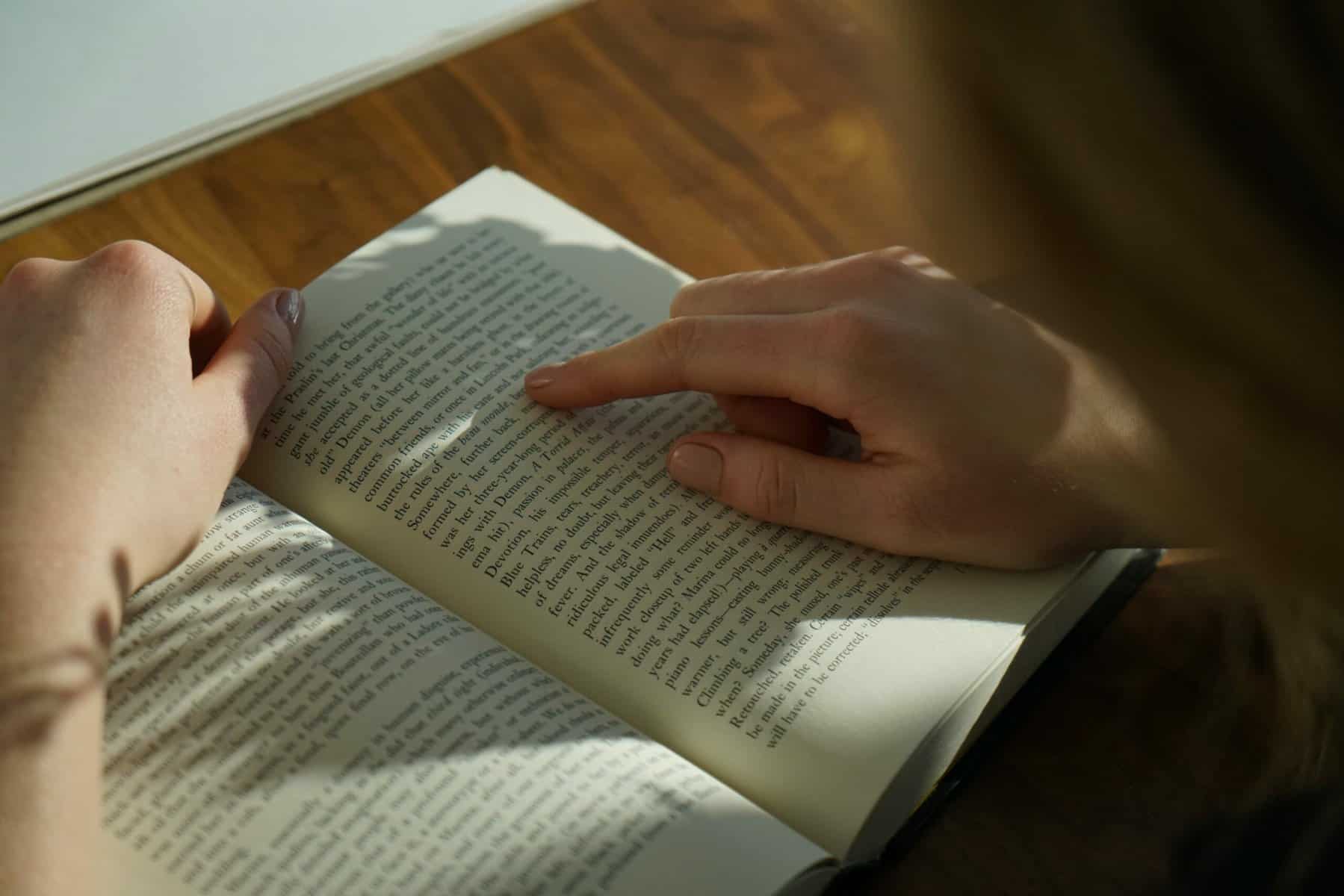 Photo by Thought Catalog
A quick note that some of my posts contain affiliate links. When you buy through these links, I may earn a commission.

Not all binge-worthy books are fiction. Some of the most gripping books ever written are non-fiction, and despite being grounded in fact, these books can be just as immersive, enchanting, and thrilling as any novel.

The books on this list are proof of how non-fiction books can absolutely be page-turners. Including tales of war, survival, adventure, difficult upbringings, and incredible characters, these are some of the most unputdownable non-fiction books.

If you’ve got an empty weekend coming up or just want to escape into the pages of a gripping story, read on…

The most gripping non-fiction page-turners that read like fiction

Unbroken is one of the best non-fiction books of the last few years – and a moving testament to the resilience of the human mind, body, and spirit.

In boyhood, Louis Zamperini was a delinquent. As a teenager, he channeled his defiance into running, discovering a talent that carried him to the Berlin Olympics. But when World War II began, the athlete became an airman, embarking on a journey that led to a doomed flight on a May afternoon in 1943 in which his Army Air Forces bomber crashed into the Pacific.

Surviving against the odds – and about to contend with even greater trials than the ocean – this cinematic page-turner shares the unimaginable story of how Zamperini was driven to the limits of human endurance and forced to answer desperation with ingenuity and suffering with hope.

If you daydream about escaping into the woods to live in a cabin by a stream, you’ll probably love reading The Last American Man. Reading like fiction at times and toeing the line between man and myth, it’s Elizabeth Gilbert’s biography of Eustace Conway who in 1977, at the age of seventeen, left his family’s comfortable suburban home to move to the Appalachian Mountains.

For more than two decades he has lived there, making fire with sticks, wearing skins from animals he has trapped, and trying to convince Americans to give up their materialistic lifestyles and return with him back to nature.

For a gripping non-fiction book of ambition and hubris that reads like a thriller, pick up Bad Blood. This is the fast-paced story of one of the biggest corporate frauds in history: the Silicon Vally “unicorn” Theranos and its dazzling founder and CEO, Elizabeth Holmes.

4. Midnight in Chernobyl: The Untold Story of the World’s Greatest Nuclear Disaster by Adam Higginbotham

Many of us know the basics of what happened at Chernobyl. But the real story of the accident, clouded from the beginning by secrecy, propaganda, and misinformation, has long remained in dispute. With a vast amount of research, Adam Higginbotham changes this with an “account that reads almost like the script for a movie” (The Wall Street Journal).

Midnight in Chernobyl is the mesmerizing non-fiction story of what really caused and followed one of the twentieth century’s greatest disasters, as seen through the eyes of the men and women who witnessed it firsthand for a can’t-put-down reconstruction of an event that changed history.

5. Killers of the Flower Moon: The Osage Murders and the Birth of the FBI by David Grann

In the 1920s, the richest people per capita in the world were members of the Osage Nation in Oklahoma. After oil was discovered beneath their land, the Osage rode in chauffeured automobiles, built mansions, and sent their children to study in Europe. Then, one by one, the Osage family began to be killed off in mysterious circumstances, alongside those who dared to investigate the killings.

As the death toll rose, the newly created FBI took up the case, and the young director, J. Edgar Hoover, turned to a former Texas Ranger named Tom White to try to unravel the mystery. Killers of the Flower Moon, a non-fiction bestseller, is a haunting true-life murder mystery about one of the most chilling conspiracies in American history.

6. Born a Crime: Stories from a South African Childhood by Trevor Noah

Trevor Noah’s unlikely path from apartheid South Africa to the desk of The Daily Show began with a criminal act: his birth. Born to a white Swiss father and a black Xhosa mother at a time when such a union was punishable by five years in prison, Trevor was kept mostly indoors until finally liberated by the end of South Africa’s tyrannical white rule.

Whether subsisting on caterpillars for dinner during hard times, being thrown from a moving car during an attempted kidnapping, or just trying to survive the pitfalls of dating in high school, Trevor illuminates the world that shaped him with wit and honesty in this must-read memoir.

Born a Crime is a moving portrait of a boy making his way through a damaged world in a dangerous time, armed only with a keen sense of humor and a mother’s unconventional, unconditional love.

7. Say Nothing by Patrick Radden Keefe

In Say Nothing, an intrictately researched book that’s as gripping and finely paced as a novel, Patrick Radden Keefe uses the abduction and murder of Jean McConville – a 38-year-old widow and mother of 10 – to tell the wider history of the Troubles in Northern Ireland. Everyone in the neighbourhood knew that the I.R.A. was responsible for her murder, but in a climate of fear, no one would speak of it.

This can’t-put-down book conjures a world of passion, betrayal, vengeance, and anguish, including interviews with people on both sides of the conflict. Patrick Radden Keefe manages to transform the tragic statistics into a human, searing saga.

8. Into Thin Air: A Personal Account of the Mt. Everest Disaster by Jon Krakauer

This harrowing tale of the perils, bad luck, and heartbreaking heroism of mountaineering is one of the best pieces of adventure writing ever published. Into Thin Air is the epic account of the storm on the summit of Mt. Everest that claimed five lives and left countless more – including Krakauer’s – in guilt-ridden disarray.

By writing Into Thin Air, Krakauer may have hoped to exorcise some of his own demons and lay to rest some of the painful questions that still surround the event. But further interviews and investigations only lead him to the conclusion that his perceived failures were directly responsible for a fellow climber’s death. Even if you know nothing about high-altitude climbing, this memoir is hard to put down.

Educated is the bestselling memoir of a woman who, despite being kept out of school, finds a way to leave her Mormon anti-government survivalist family and earn a PhD from Cambridge University. Like Where the Crawdads Sing, this gripping book has similar vibes of introspection, self-discovery, and finding your way as an outsider.

As Alec MacGillis writes for The New York Times, “By the end, Westover has somehow managed not only to capture her unsurpassably exceptional upbringing, but to make her current situation seem not so exceptional at all, and resonant for many others.”

Endurance is one of the greatest adventure stories ever written, defining the harrowing and miraculous voyage that has defined heroism for the modern age. This New York Times bestseller is the harrowing tale of explorer Ernest Shackleton’s 1914 attempt to reach the South Pole in a near-impossible journey.

11. The Splendid and the Vile: A Saga of Churchill, Family, and Defiance During the Blitz by Erik Larson

Erik Larson is one of the very best writers of unputdownable non-fiction. In The Splendid and the Vile, his bestselling book from 2020, Erik Larson shows, in cinematic detail, how Churchill taught the British people “the art of being fearless” with true leadership, courage, and eloquence.

In this gripping and inspiring book, we witness how Churchill held his country together during World War II, persuaded President Franklin Roosevelt that Britain was a worthy ally, and found the conviction to fight to the end. But it’s also a story of intimidate domestic drama, set against the backdrop of the prime-ministerial country home, Chequers; Churchill’s wartime retreat, Ditchley; and of course, 10 Downing Street.

12. In Cold Blood by Truman Capote

In Cold Blood is probably the most famous true crime novel of all time – and one of the first non-fiction novels ever written. On November 15, 1959, in the small town of Holcomb, Kansas, four members of the Clutter family were savagely murdered by blasts from a shotgun held a few inches from their faces. There was no apparent motive for the crime, and there were almost no clues.

In this chilling book, Truman Capote reconstructs the murder and the investigation that led to the capture, trial, and execution of the killers, generating both mesmerizing suspense and unsurpassable empathy.