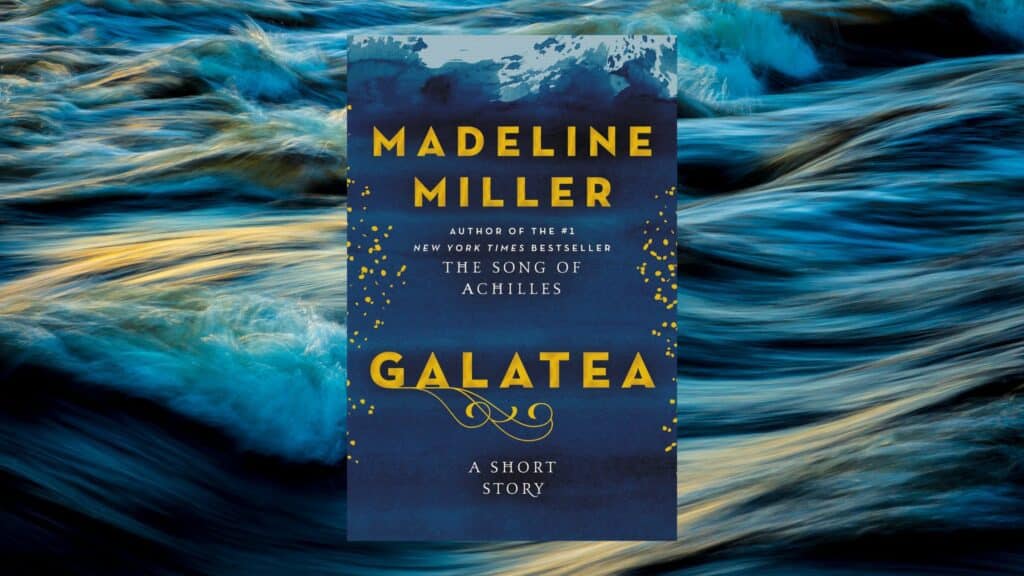 Although it’s quick enough to read in the bath before the water gets cold, Galatea is perfectly contained, defiantly powerful, and a short story you’ll want to immediately discuss with fellow booklovers.

As soon as I finished Galatea, which took less than an hour (even though I wanted to savour it), I walked to my husband’s side of the bed and placed it at the top of the stack of books on his bedside table. This happens often, and is just one of many non-verbal cues that you should really read this next.

In the last few years, I loved reading Circe and The Song of Achilles. Reading Galatea has felt like a Madeline Miller top-up: a welcome reminder of just how much I adore her stunning writing and how I really should re-read her novels.

Like Circe, Galatea is a story focused on transformation, or as Miller explains in the afterword, on “finding freedom for yourself in a word that denies it to you”. Also echoing Circe, and showing one of Miller’s greatest skills, it’s a story that reimagines a classic myth and gives a new, powerful, and defiantly feminist voice to a previously misunderstood character.

Here with Galatea, Miller exchanges the character’s traditional role as an obedient and subversive girl for a woman who’s trapped, controlled, abused, and desperate for freedom.

Despite the growing number of authors trying to replicate her success at reimagining Greek mythology, I find Miller’s gloriously powerful retellings of classic myths to be totally unique.

As is her trademark, Madeline Miller’s writing here is as sun-kissed and brutally striking as the Greek islands she writes about. I adore her themes of beautiful yet destructive nature and women with brooding hidden power.

Reading Galatea has made me even more excited to find out more about Persephone (here’s what we know about Madeline Miller’s next book).

Is Galatea worth reading?

If you’re looking for a beautifully-written retelling of a compelling Greek myth, I’d wholeheartedly recommend Galatea. If you’ve enjoyed Madeline Miller’s previous novels, Circe and The Song of Achilles, you should also absolutely read this story next. But it’s also the perfect book to read first by Madeline Miller.

Galatea is one of the best short stories I’ve read in a long time. Although it’s fast to read, it’s perfectly contained, breathtakingly powerful, and a piece of writing you’ll want to immediately discuss with fellow bookworms.

The gorgeous little hardcover of Galatea is also one of my favourite recommended stocking stuffers and small gifts for book lovers this year. It’s a tiny gem of a book that’s a beautiful addition to any bookshelf.

Synopsis of Galatea (no spoilers)

“Everyone looked at me, because I was the most beautiful woman in the town. I don’t say this to boast, because there is nothing in it to boast of. It was nothing I did myself.”

First published in 2013, Galatea isn’t actually a new book by Madeline Miller. However, it’s just been published in November 2022 (and earlier this year outside the US) as a beautiful little hardcover that’s just 49 pages long plus a wonderful six-page afterword.

In this short story, Madeline Miller boldly reimagines the myth of Galatea and Pygmalion. As Miller explains in the story’s afterword, it’s a response, “almost solely”, to Ovid’s version of the Pygmalion myth in the Metamorphoses.

Galatea (“she who is milk-white”) is the most beautiful woman her town has ever seen, carved from stone by Pygmalion, a skilled marble sculptor, and blessed with the gift of life by a goddess.

In Ovid’s myth, Galatea does not speak at all and isn’t even given a name – she is only called the woman. She is an object of desire and nothing more. But here in Miller’s short story, she is a real woman with startling courage and a clear and confident voice. Fittingly, Pygmalion isn’t named and is referred to as her husband.

“The term ‘incel’ wasn’t in wide circulation when I wrote this, but Pygmalion is certainly a prototype”, writes Miller in the afterword of Galatea. He demands his wife’s meekness, devotion, beauty, and perfection, even as his own hair thins and belly fattens. He deems all other women to be sluts, expressing horror and disgust for their independence and shamelessness.

It’s a story that is sadly still all too relatable for many women, but, as Miller explains in the afterword, “that is the mark of a good source myth; it is water so wide it can reach across centuries.”

This is a man who desires women but hates them, finding that the only way he can live out his fantasies of purity and control are by carving a woman from stone – which, too, backfires in this story.

Pygmalion expects Galatea to please him with her youthful beauty and humble obedience, but in Madeline Miller’s retelling, Galatea has desires of her own. She yearns for independence – and knows she must break free to rescue her daughter, whatever the cost.

An in-depth summary of Galatea (spoilers!)

At the beginning of Galatea, we find the main character Galatea in bed and being tended to by nurses. They worry about how pale she is, but as Galatea responds, she’s always this colour: “Because I used to be made of stone.”

Although she longs to walk and leave her imprisonment, Galatea is made to lie down and avoid any sort of exertion by the nurses and doctors, who receive plenty of money from her husband. The reason he has this money, we learn, is because of Galatea.

It’s her husband who carved her from marble as his ideal of virginal beauty. He then dressed her in silks, draped her in flowers, brought her gifts, and prayed to the goddess every night. After all this care, the goddess blessed Galatea with the gift of life, eleven years ago now.

Strange and with a beauty that could only have come from the gods, her husband kept her hidden inside as much as he could. But word started to spread, and suddenly everyone wanted statues from him. He chisels maiden after maiden, knowing that they will not come to life because they are not worthy of the goddess’ gift, unlike Galatea.

When Galatea wonders why he didn’t just marry a girl from the town, he responds: “Those sluts […] I would not have them.” Galatea, above all, exists to fulfill his sexual fantasy and ideal of beauty and virtue.

When her husband visits her, they undergo a strange and rehearsed ritual in which Galatea pretends to be asleep (and fights the desire to feign a snore), and he exclaims that she must be made of stone, because how could a real woman be so beautiful.

She then wakes from the stone, and as Galatea explains bluntly, “that’s when I’m supposed to open my eyes like a dewy fawn, and see him poised over me like the sun, and make a little gasping noise of wonder and gratitude, and then he fucks me.”

During this one visit, after they have sex, Galatea finds out that he is working on a new statue – this one for himself, he says, of a ten-year-old girl. Galatea seems jealous (or more likely, unsettled and worried for this girl’s future, if it’s anything like her own). Her husband then notices the stretch marks on her stomach, asks how long they have been there, and calls them ugly, saying he would chisel them off if she were still made of stone.

We learn that Galatea and her husband have a ten-year-old daughter together, Paphos, who was conceived the first time they had sex. Galatea misses her daughter dearly, who is also beautiful and stone-pale. A tutor taught Paphos some lessons, and she passed these on to Galatea in secret, but her husband sends the tutor away after a fit of jealousy.

Galatea believes that she doesn’t think her husband expected her to be able to talk. When he wished her to live, he only thought of her beauty and body: “only warm so that he might fuck me”.

Now, her husband admonishes her growing lack of shame and meekness, physically abusing her and leaving her covered in bruises.

One day, with a little money found on the street, Galatea and Paphos set off for the countryside in secret, but they are too easily identifiable and found soon after. She knows she will have to be more devious to craft an escape route.

On another visit from her husband, Galatea tells him that she is pregnant, which he says is not possible because he leaves his seed on her stomach. But she puffs out her stomach and says that with the gods, anything is possible. The doctor gives Galatea tea to abort the pregnancy, she waits until he is gone, and then doubles over in pain and tells the nurses that they must fetch the doctor back.

As soon as the nurse leaves her, Galatea escapes and runs towards the town. At her house, she sees Paphos asleep and doesn’t want to frighten her. So she finds a pot of sand, spills a little on the floor, and spells out Paphos.

She then breaks into her husband’s studio and sees the new statue of the girl girl in the centre of the room, then goes to her husband’s bedroom. “Ah, my beauty is asleep”, she says, just as he would say to her before having sex with her. Then, she runs out the house and he rushes after her.

He follows her towards the sea, grabbing her in the water and expecting her to fight. But she doesn’t, and instead seizes him around the ribs and the weight pulls them both under. As she returns to her roots and uses the gift she was born with – heavy, heavy stone – we hear that, “He had no chance, really. He was only flesh.”

Before sinking to the bottom of the ocean floor, Galatea thinks of Paphos and her stone sister. Then, she imagines how the crabs will come for her husband, and she settles into the ocean floor and sleeps.

Does Galatea die at the end? At least in my interpretation, yes. Galatea sacrifices herself to kill her husband so that her daughter can be free and the new statue of a girl will not come to life and suffer.

What the critics say

For more books like Galatea, you can’t go wrong with Madeline Miller’s two bestselling novels, Circe and The Song of Achilles.

Read the first pages of Galatea, or see the book on Amazon.