This post isn’t about literature, but it is about words. Powerful ones. A lot of people come to my blog via my TED talks for anxiety post, and I hope that this piece on TED talks for low self-esteem can be as relevant.

I’ve never been graced with a great deal of self-esteem. Now I’m comfortable with how I am, often realising the extent to which I work hard and do well, but as a child and teenager this was a different story. As a perfectionist I always wanted to be and do better, although I was rarely satisfied with any final result. I always strived for more, which isn’t a healthy way to live.

Nowadays I still work very hard, but I allow myself congratulation and the opportunity to feel good about myself. One specific way in which I remedy low self-esteem is by watching TED talks. How?

TED talks often demonstrate the ways in which others have overcome challenges to become more secure in themselves. Such talks give us the courage to do the same, alongside the knowledge that we are good enough. Below I’ll list some of the TED talks that have most affected my self-esteem, provided me with a story to relate to, and inspired me to step up and approach life confidently.

1. Shane Koyczan: “To This Day” … for the bullied and beautiful 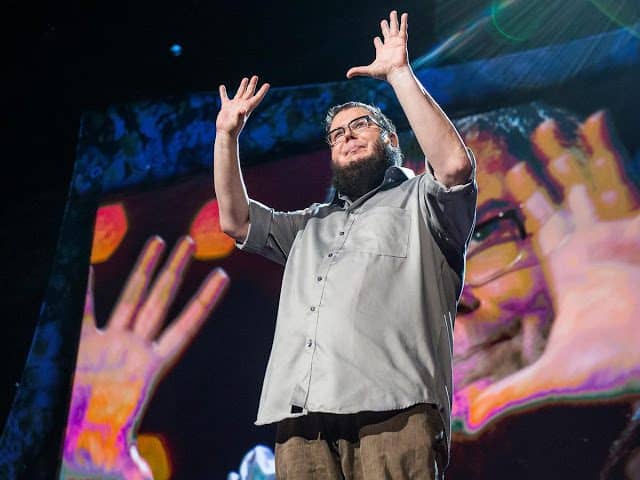 Shane Koyczan is incredible. I first watched his TED talk, and for that matter first heard his poetry, with my boyfriend. I was looking for something to watch, and asked if he’d like to watch a TED talk that promised poetry, a violin accompaniment, and animation. How could that possibly work well?! We started watching, sniggered a little, admired Shane Koyczan’s facial hair, but slowly became more affected by the performance.

There’s no way we expected to be so affected by it. We stopped talking, acquired more serious expressions, and truly understood what the poet was talking about. Since then my boyfriend and I have frequently returned not only to this TED talk, but also to other poems by Shane Koyczan. His work says so much about exclusion and low self-esteem, particularly when growing up, but he also speaks of overcoming problems and gaining a strength that once seemed impossible. By all means give the poet that performed at the Vancouver 2010 Winter Olympics a listen – I guarantee that his words will move you too.

“If you can’t see anything beautiful about yourself, get a better mirror.”

This TED talk is both fascinating and insightful. Drew Dudley suggests that leadership is something that we are all capable of, no matter how powerful we perceive ourselves to be. If I scheduled a viewing of this talk once a week, I’m sure I’d feel so much better about myself as a result.

3. Brené Brown: The power of vulnerability

Here Brené Brown suggests a unique view of vulnerability that will force you to reconsider your own feelings of low self-esteem. To Brown, vulnerability can in fact be truly powerful.

It’s always interesting to hear JK Rowling speak in an extensive way about something she has chosen to speak about. Not interview questions or interrogation about a possible Harry Potter sequel, but her true feelings on a subject. In her delivery of the Harvard 2008 Commencement address, Rowling talks about failure and what it truly means to her. If you find that “failing” is what knocks your self-esteem, consider the following:

“Some failure in life is inevitable. It is impossible to live without failing at something unless you lived so cautiously that you might as well not have lived at all, in which case you fail by default.”

5. Amy Cuddy: Your body language shapes who you are

Still struggling with low self-esteem? You can always fake it. In one of my favourite TED talks, Amy Cuddy discusses how important body language really is. However, she also reveals how easy in fact it is to fake. What is more, the more you fake the body language of high self-esteem, the more natural confidence and assertiveness will become.

Do you suffer from low self-esteem, or have you in the past? What helps you to overcome such feelings and feel confident?

7 gentle pieces of wisdom from Thich Nhat Hanh on loving ourselves (How to Love Part 1)
The 28 books that stopped my worrying, sent me travelling, and shaped who I am today
Brooklyn by Colm Tóibín: A Novel About Transforming Ourselves That's Inspired by Austen
Have courage like Arya and sail beyond the sunset (what is west of Westeros?)
'Feast on your life': Tom Hiddleston on Derek Walcott's "Love After Love" for accepting ourselves