As a lover of pretty books, I do judge books by their covers a lot of the time. When I know that the book’s a classic or that it can come with a beautiful cover, I’ll usually buy a copy rather than getting it from the library or for my Kindle. I know not everyone is like this, but I view books as items for decoration as well as reading. Exciting covers also make me happy, so I’ll encourage the inclusion of them in my life.

In this post are five of my favourites, which I’ll list from the top left to the bottom right in the photo. 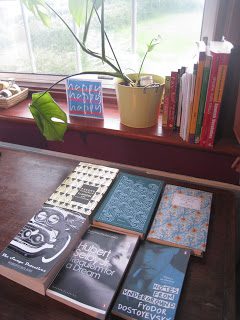 The simple & timeless wisdom of The Things You Can See Only When You Slow Down by Haemin Sunim
5 Pieces of Advice for Reading, Understanding & Enjoying James Joyce
Sit and be peaceful with Silence: In the Age of Noise by Erling Kagge
Whether or not to keep blogging: taking a sabbatical after one million pageviews
Books for leaving a job that makes you unhappy & going freelance (from my last six months)
Study Success: 11 Books & Articles to Help Students Hack Their Education
"All things are at odds when God lets a thinker loose on this planet": Edith Hamilton and sexism in ...
A new direction for Tolstoy Therapy
Reading tip: how to get your Kindle highlights and notes on your computer (and sync to Evernote)
7 gentle pieces of wisdom from Thich Nhat Hanh on loving ourselves (How to Love Part 1)