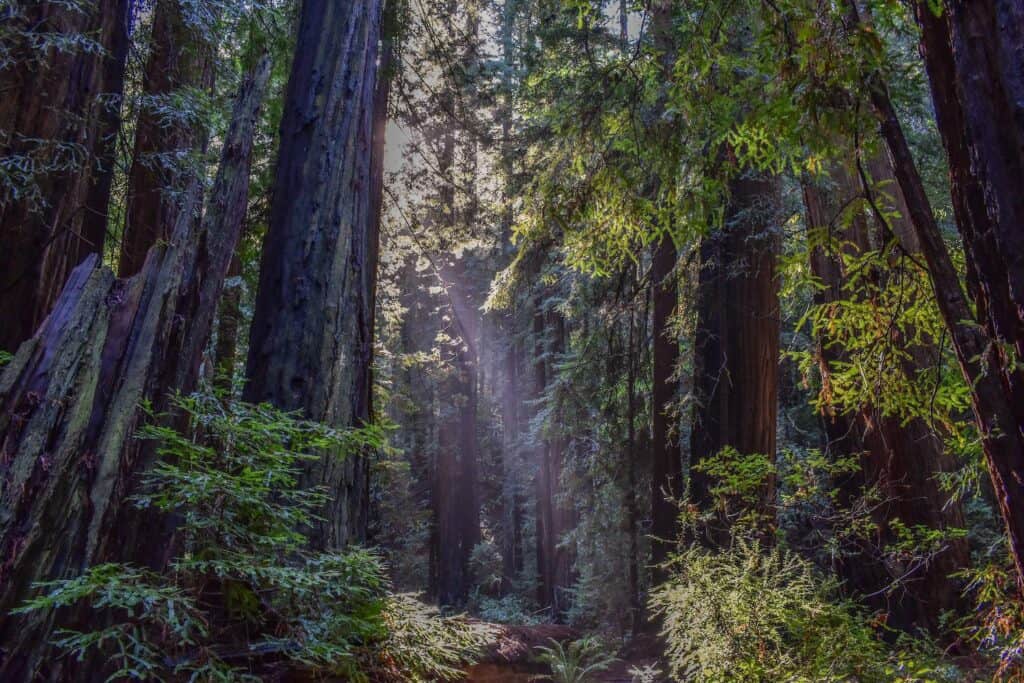 Photo by Adam Nemeroff
A quick note that some of my posts contain affiliate links. When you buy through these links, I may earn a commission.


“Trees warp time, or rather create a variety of times: here dense and abrupt, there calm and sinuous.”

When my husband sees the books I’ve picked up from the library, he usually makes a comment along the lines of, seriously, more books about trees?

I love trees: the lemon tree on our balcony which will soon come inside for winter, the Sequoiadendron giganteum in our local park that a Danish philanthropist chose for his private collection, the oak trees I grew up surrounded by in my Sussex farm town… they’re sources of such inspiration, strength, and a reminder of the beauty of life for me. So it’s not surprising that I also love books about trees.

Fortunately for me, a lot of great novels about trees have been published in the last few years – and if you look further back, you can find many classic books singing the praises of humankind’s leafy friends.

The best fiction books about trees

1. The Island of Missing Trees by Elif Shafak

I’m reading The Island of Missing Trees at the moment (update: here’s my review) and it’s so gorgeously written. This must be the first book I’ve ever read that features the perspective of a fig tree, and it’s just so delicately and thoughtfully crafted.

It’s 1974 on the island of Cyprus, and two teenagers from opposite sides of a divided land meet at a tavern in the city they call home. In the centre of the tavern, growing towards the light from a cavity in the roof, is a fig tree that witnesses everything.

Decades later in north London, sixteen-year-old Ada Kazantzakis has never visited the island where her parents were born. But as she seeks to detangle years of secrets, she does have one connection to the land of her ancestors: a Ficus Carica growing in the back garden of their home.

Like Richard Powers’ bestselling The Overstory, this stunning book from 2021 by Elif Shafak makes it difficult to look at the trees around you in the same way.

2. The Overstory by Richard Powers

Oh, how I adore this book. A paean to the natural world, Richard Powers weaves together interlocking fables that range from antebellum New York to the late twentieth-century Timber Wars of the Pacific Northwest and beyond.

The Overstory is a gateway into the vast, interconnected, and magnificently intricate world that we depend on in so many ways: the world of trees. And it’s one of my most-loved books from the last decade.

“You and the tree in your backyard come from a common ancestor. A billion and a half years ago, the two of you parted ways. But even now, after an immense journey in separate directions, that tree and you still share a quarter of your genes…”

Greenwood is a superb book. You can think of it as The Overstory’s shy cousin – it hasn’t achieved anywhere near the same attention, but it’s fantastic.

This is Michael Christie’s magnificent generational saga that charts a family’s rise and fall alongside its secrets and inherited crimes, accompanied all the while by one steady presence: trees.

I was slow to read Greenwood after The Overstory. I didn’t think it could be as good, but I really should have had more belief in it: it’s a wonderfully complementary book about trees to read after Powers’ novel.

“Maybe trees do have souls. Which makes wood a kind of flesh. And perhaps instruments of wooden construction sound so pleasing to our ears for this reason: the choral shimmer of a guitar; the heartbeat thump of drums; the mournful wail of violins–we love them because they sound like us.”

4. The Word for World is Forest by Ursula K. Le Guin

There was a wonderful interdisciplinary festival celebrating the intersections between science, nature, and humanity in my local park this summer, with the beautiful story Vaster Than Empires and More Slow by Ursula Le Guin as its inspiration.

Here, I’ve chosen another of Le Guin’s books about trees, The Word for World is Forest. Centuries in the future, Terrans have established a logging colony and military base named “New Tahiti” on a tree-covered planet whose small, green-furred, big-eyed inhabitants have a culture centered on lucid dreaming.

We read how the Terrans’ greed overturns the ancient society, until one fatal act sets rebellion in motion and changes the people of both worlds forever.

The Tolkien scholar Matthew Dickerson wrote, “It would be difficult to overestimate the importance of trees in the writings of J. R. R. Tolkien”. Caring about trees is a central part of the world of Tolkien, and the author’s own personality, too.

From Treebeard in the Fangorn Forest to the tall Mallorn trees at the heart of Lothlórien, when you dive into Middle Earth you tumble into a world of ancient, wise, and all-knowing trees.

In this uplifting tale about love, loss, friendship, and redemption, lifelong lover of trees Harry Crane works as an analyst in a treeless US Forest Service office.

When his wife dies suddenly in an accident, devastated, he makes his way to the remote woods of northeastern Pennsylvania’s Endless Mountains, intent on losing himself. But fate intervenes, and the course of Harry’s life suddenly turns – in the direction of a fiercely determined young girl named Oriana.

Uprooted features the most evil trees on this list. This adored fantasy book from 2016 is the story of Agnieszka, a young woman who loves her valley home, her quiet village, the forests, and the bright shining river. But the corrupted Wood stands on the border, full of malevolent power, and its shadow lies over her life.

“To enter Damnation Spring, the debut novel by Ash Davidson, is to encounter all the wonder and terror of a great forest,” writes Ron Charles for The Washington Post.

When Colleen Gundersen, a mother and amateur midwife in redwood country, notices an increase in local miscarriages, she believes it’s caused by the pesticides used by the Sanderson Timber Company. The trouble is that this is the employer of her neighbours and her family. That includes her tree-topper husband, Rich, who leaves the house each morning to do a job that both his father and grandfather died doing.

Damnation Spring is a compassionate story of a family whose bonds are tested, but also a community clinging to a vanishing way of life in a Pacific Northwest logging town.

For more wildly beautiful books, you might like my collection of the best books set in nature to imagine life in the wild, as well as my review of my favourite modern Walden, Consolations of the Forest: Alone in a Cabin in the Middle Taiga by Sylvain Tesson.