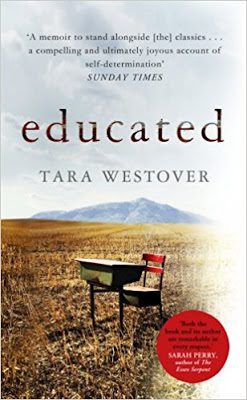 How do I start talking about Educated by Tara Westover?

I’ll try with this: I was recommended the book by my boyfriend, who is studying for a Ph.D. in chemistry. He has postgraduate education in common with the author, Tara Westover. But he doesn’t have many other things in common, and especially not a Mormon survivalist upbringing.

Tara Westover was brought up in the mountains of Idaho, where her family prepared for the end of the world by stockpiling home-canned peaches, guns, fuel and packing “head-for-the-hills” bags. Instead of school, she helped her mother, a midwife and healer, to brew and sell herbal remedies. She also salvaged metal in her father’s junkyard with her brothers, which led to burns, breaks, gashes, and concussions and were treated herbally at home, with few exceptions.

Homeschooling is a very loose term for her early education – self-education seems more applicable – but Tara’s older brother, Tyler, got into college and came back to tell his siblings of the world beyond the mountain. If you stood out like a sore (bookish) thumb in your family too, I expect you will like this quote:

The story of how Tyler decided to leave the mountain is a strange one, full of gaps and twists. It begins with Tyler himself, with the bizarre fact of him. It happens sometimes in families: one child who doesn’t fit, whose rhythm is off, whose meter is set to the wrong tune. In our family, that was Tyler. He was waltzing while the rest of us hopped a jig; he was deaf to the raucous music of our lives, and we were deaf to the serene polyphony of his. Tyler liked books, he liked quiet. He liked organizing and arranging and labeling.

Tara followed in his footsteps: she self-taught enough mathematics, grammar, and science to take the ACT, retake it, and then be admitted to Brigham Young University. There, she studied psychology, politics, philosophy, and history, and came to terms with how she had had never learned about pivotal world events like the Holocaust and the Civil Rights Movement.

I learned about Margaret Thatcher and the Thirty-Eighth Parallel and the Cultural Revolution; I learned about parliamentary politics and electoral systems around the world. I learned about the Jewish diaspora and the strange history of The Protocols of the Elders of Zion. By the end of the semester the world felt big, and it was hard to imagine returning to the mountain, to a kitchen, or even to a piano in the room next to the kitchen.

She needed a near-perfect GPA to qualify for scholarships and be able to continue studying, and she succeeded. What started off as financial help turned into further academic opportunity, and she was accepted for a programme at Cambridge University. This was followed by a Ph.D. at Cambridge, with a brief stint at Harvard.

Educated is a book about learning against the odds. It reminded me of the joy of learning, but learning doesn’t exactly come across as a joy in the book. It is more of a compulsion; a literal path to escape that’s about the destination, not the journey. This isn’t a surprise, really, considering what the Westover siblings had to escape from. Tara’s upbringing featured countless instances of emotional and physical abuse, and it seemed to be a similar story for her siblings.

As Tara explores more of the world and its ideas, I adored her discovery of the early feminists, starting with the “fiery pages” of Mary Wollstonecraft and John Stuart Mill:

“There was a single line written by John Stuart Mill that, when I read it, moved the world: “It is a subject on which nothing final can be known.” The subject Mill had in mind was the nature of women. Mill claimed that women have been coaxed, cajoled, shoved and squashed into a series of feminine contortions for so many centuries, that it is now quite impossible to define their natural abilities or aspirations. […]

Blood rushed to my brain; I felt an animating surge of adrenaline, of possibility, of a frontier being pushed outward. Of the nature of women, nothing final can be known. Never had I found such comfort in a void, in the black absence of knowledge. It seemed to say: whatever you are, you are woman.“

Education is about growth, but that requires closing some doors. The fact is: exposing yourself to other worlds, cultures, and knowledge – whether through travel or books – sets you apart. You change your self, or you grow into your self. You can think for yourself. And with it, you may close doors on the past, on family, and on younger selves. You may have to, especially if you are asked to choose between one life or the other, as Tara Westover was:

Everything I had worked for, all my years of study, had been to purchase for myself this one privilege: to see and experience more truths than those given to me by my father, and to use those truths to construct my own mind. I had come to believe that the ability to evaluate many ideas, many histories, many points of view, was at the heart of what it means to self-create. If I yielded now, I would lose more than an argument. I would lose custody of my own mind. This was the price I was being asked to pay, I understood that now. What my father wanted to cast from me wasn’t a demon: it was me.

To create a new life, you have to say goodbye to your younger self. I thought of my own younger self as I read Educated. About five years ago, I had EMDR therapy to deal with some experiences in my childhood. A key part of it was imagining my younger me and realising that I wasn’t that girl anymore. I learned to send warmth and love to her; to provide support that maybe she wasn’t getting back then. And I also learned to then walk back into my own life as a confident, capable adult.

It was tough to get away from my past, and my childhood was incredibly cushty compared to Tara Westover’s. How could I imagine the fortitude she needed to craft her own life and step away from the past (and with it, her family)? Even without imagining her strength, I could admire it though.

The past is beautiful because one never realises an emotion at the time. It expands later, & thus we don’t have complete emotions about the present, only about the past.

When I finished the book, I called my boyfriend. “How is it possible that in one family you get such different people?”, I asked him. “Three siblings without a high school diploma, and three with postgraduate education?” He replied that it wasn’t that impossible; just look at my own family. That’s on a much milder level, but touché.

Perhaps it’s about different personalities, or that we all respond differently to external stimuli. A tough childhood can build grit in you, but anxiety and depression in your brother. Your sister could experience mental illness but then come out stronger than before. Some of the most inspiring people have had the toughest paths – but they also tend to have spectacular drive and, eventually, support.

To build our own impressive path, we have much to gain by exposing ourselves to stories that show us trials, tribulations, and strength in the face of hardship. We may find this in fiction, or it may be in an autobiography such as Educated

I Am Pilgrim by Terry Hayes: One of The Best Thrillers Ever Written?
Books for leaving a job that makes you unhappy & going freelance (from my last six months)
The Priory of the Orange Tree: an entrancing story of dragon riders, courage & adventure
I Found My Tribe by Ruth Fitzmaurice: wild swimming, coping, and finding your people
Cutting for Stone is a book I should have read years ago
Aung San Suu Kyi and the Books That Kept Her Strong, Including John le Carré, Austen & WWI Poetry
The Salt Path by Raynor Winn: finding strength and facing illness with a 630-mile hike
"The universe is made of stories, not atoms": 10 reasons to tell your story, as inspired by Bobette ...
The power of a sunset: how Viktor Frankl & Tolstoy’s Pierre Bezukhov are lifted from hardship by the...
Making your life an epic adventure with The Gutsy Girl by Caroline Paul