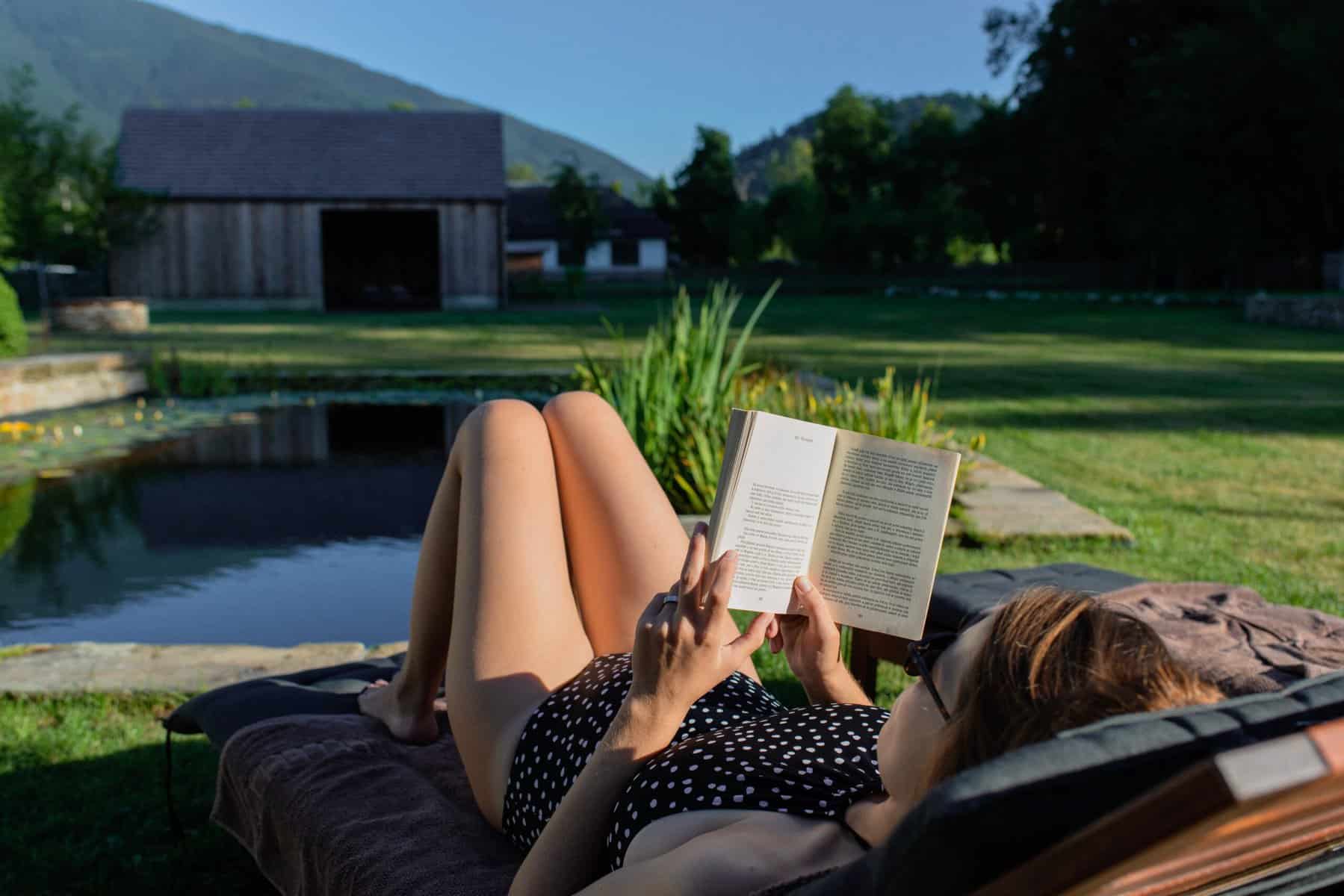 Photo by Filip Urban
A quick note that some of my posts contain affiliate links. When you buy through these links, I may earn a commission.

The Love Hypothesis by Ali Hazelwood is one of the most popular romance books right now, offering STEM vibes and a plot that Christina Lauren has described as “contemporary romance’s unicorn: the elusive marriage of deeply brainy and delightfully escapist.”

In this binge-worthy book, third-year Ph.D. candidate Olive Smith doesn’t believe in lasting romantic relationships. But her best friend does, and that’s got her into a tricky situation. Now she has a fake boyfriend and an experiment that feels dangerously close to combustion.

The author of The Love Hypothesis has a pretty interesting background: originally from Italy, Ali Hazelwood lived in Germany and Japan before moving to the US to pursue a Ph.D. in neuroscience (and is now a professor).

Alongside her novels, Ali is also the author of peer-reviewed articles about brain science, in which no one makes out and the ever after is not always happy.

The best books like The Love Hypothesis to escape into next

1. The Kiss Quotient by Helen Hoang

If you’re looking for another STEMinist romance with brainy characters like Ali Hazelwood’s, read The Kiss Quotient. I think it’s one of the best books like The Love Hypothesis.

I love Helen Hoang’s books. Not only are they quirky and clever, but they also have incredibly well-rounded autistic characters. As a woman with autism spectrum disorder, I didn’t know this was something I needed to read. But it turns out I absolutely do.

When she was writing her first book, The Kiss Quotient, Helen Hoang had recently been diagnosed with autism spectrum disorder. As she tried to make sure of her own diagnosis, she folded her experiences into the story of Stella, a young and ambitious woman on the autism spectrum grappling not just with her love life, but who she really is.

Hoang’s second and third books in the series, The Bride Test and The Heart Principle, continue with more fascinating autistic characters – and a whole lot of sex.

2. The Soulmate Equation by Christina Lauren

It’s also another binge-worthy STEM romance that’s one of the top recommended books like The Love Hypothesis on Reddit. In one thread, Reddit user PaisleyxPoet shared, “I think I liked it even better than The Love Hypothesis – but they’re both awesome.”

Single mum Jess Davis is a numbers genius, but she’s yet to find a formula for love, especially while juggling a career with raising her daughter. After another terrible date she’s prepared to give up on love for good, but then she hears about a new matchmaking service that claims to find you the One based on a DNA equation.

This seems like an answer to her prayers, until her test shows an unheard-of 98% compatibility with the company’s founder, Dr River Pena… and Jess already knows that Dr Pena is absolutely not her soulmate.

Described as “a rom-com lover’s dream of a book” by Taylor Jenkins Reid, Book Lovers is the delightful new romance bestseller for 2022 from the author of People We Meet on Vacation.

Nora Stephens’ life is books—she’s read them all, and she lands huge deals as a cutthroat literary agent for work. But Nora has long given up on the idea of being one of the heroines she reads about, other than for her clients and her little sister Libby.

When Libby begs her for a sisters’ trip away to Sunshine Falls, North Carolina, Libby expects a laid-back trip and small-town pleasures – not constant run-ins with Charlie Lastra, a bookish brooding editor from back in the city, who is absolutely not Nora’s hero… at least, that’s what she keeps telling herself.

4. Love and Other Words by Christina Lauren

In Love and Other Words, Macy Sorensen is settling into an ambitious yet predictable routine as a new pediatrics resident: work hard, marry a successful and financially secure man, keep her head down, and not think too much about what her heart really wants.

But when she runs into Elliot Petropoulos, the first and only love of her life, the bubble she’s carefully constructed is popped. Ever since he first became her gangly and bookish friend – and up until he coaxed her heart open after the loss of her mother, before breaking it again – Elliot was once Macy’s entire world.

In this bestselling book, love, loss, and the betrayals of the past collide. If you liked The Love Hypothesis, you should definitely read this.

In Act Your Age, Eve Brown, the chaotic life of Eve Brown crashes into an unwilling recipient: Jacob Wayne, an uptight B&B owner. Jacob is always in control and expects nothing less than perfection from his staff… which now, unfortunately for him, includes the purple-haired tornado of Eve Brown who’s infiltrated his work, his kitchen, and his spare bedroom…

“I loved every page”, wrote Helen Hoang of this feel-good, sexy romcom, which is Book 3 of 3 in The Brown Sisters series.

6. Only When It’s Us by Chloe Liese

Only When It’s Us is a frenemies-to-lovers romance about a women’s soccer star and her lumberjack-lookalike classmate. This standalone is the first in a series of novels about a Swedish-American family of five brothers, two sisters, and their wild adventures as they each find happily ever after.

7. Love on the Brain by Ali Hazelwood

If you loved The Love Hypothesis, you should 100% read more by Ali Hazelwood. In her 2022 novel Love on the Brain, scientist Bee Königswasser is forced to work on a project with her nemesis—with explosive results.

Bee lives by a simple code: what would Marie Curie do? But when it comes time to actually make a move and put her heart on the line, there’s only one question that matters: what will Bee Königswasser do?

8. The Unhoneymooners by Christina Lauren

For two sworn enemies, anything can happen during a Hawaiian trip of a lifetime—maybe even love—in The Unhoneymooners, the bestselling romantic comedy from Christina Lauren.

In sharp contrast to her sister, Olive Torres is used to being the unlucky twin: from inexplicable mishaps to a recent layoff, her life seems to be almost comically jinxed.

But when there’s a free honeymoon up for grabs, Olive will be damned if she misses out on ten days of bliss in Maui… even if it means she has to enjoy paradise with her nemesis Ethan Thomas.

The weird thing is… Olive doesn’t mind playing pretend. In fact, the more she pretends to be the luckiest woman alive, the more it feels like she might be.

9. The Hating Game by Sally Thorne

The Hating Game is a laugh-out-loud romantic comedy that’s all about that fine line between hate and love. You might think that reading about work sounds awful, but in this bestseller, sworn enemies Lucy Hutton and Joshua Templeman prove that it can be compulsively readable.

Both executive assistants to co-CEOs of a publishing company, Lucy and Joshua are now against each other for the same promotion… and the tension between them is reaching its boiling point.

The Spanish Love Deception is one of the best romance books of 2022, described by Helen Hoang as having “everything you could want in a romance”.

This rom-com about a young woman who agrees to fake date a colleague and bring him to her sister’s wedding is addictively bingeworthy, and perfect to read next after The Love Hypothesis.

Catalina Martín would rather choose anyone but Aaron Blackford as her date – her tall, handsome, but totally insufferable colleague – but right now, she can’t afford to be picky. And as the wedding draws nearer, Aaron looks like her best option.

For more feel-good unputdownable books to top up your to-read list, head over to my lists of the best binge-worthy books to read in a weekend and the best feel-good books for happy reading. Enjoy!